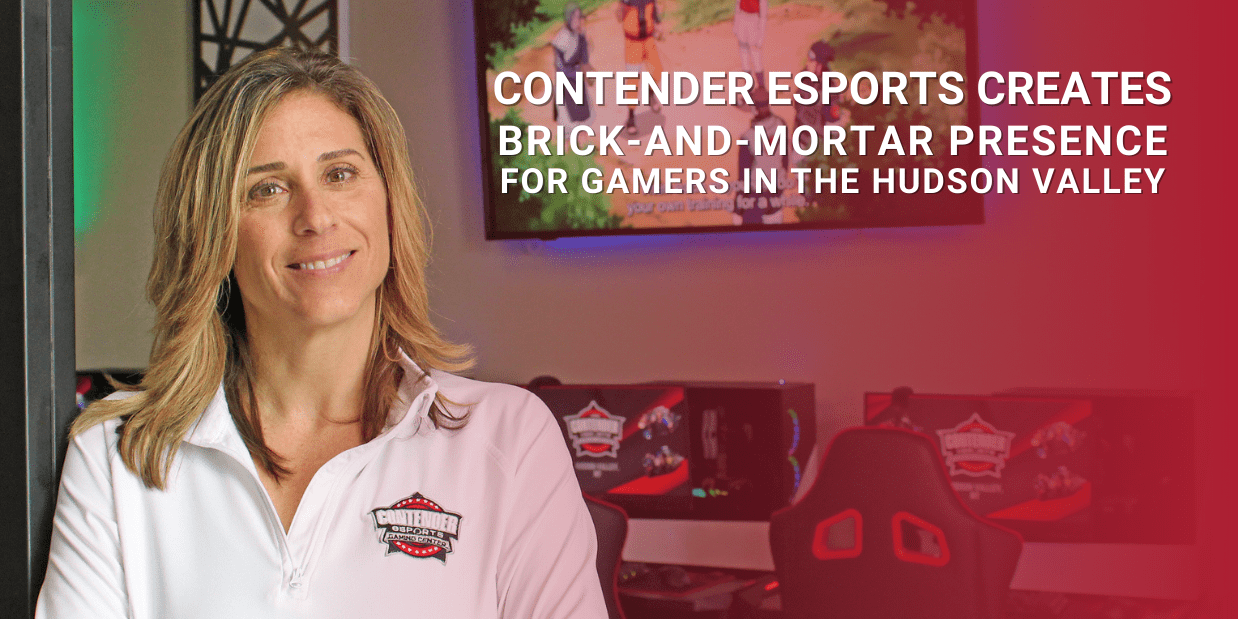 A new business in Wappingers Falls is bringing a slice of the billion-dollar esports market to the Hudson Valley.

Contender eSports, a branch of the national franchise based in Springfield, Missouri, opened earlier this month on Route 9.

While most of the franchise locations are in the southern and western United States, this is the first in the Northeast. It is one of seven open so far, with 14 more planned across the country, according to the company’s website.

Deanna Fino, owner of Contender eSports Hudson Valley, began looking into the industry after seeing how captivated her own boys were with gaming.

“Like most kids, my kids game, so we saw how they were obsessed with it and my husband and I started looking into investing and really started researching esports,” she said.

“We saw that the growth in the industry is phenomenal. Where other industries are going down, this one is just increasing, and even through Covid it had increased.”

It certainly is an industry that is growing rapidly. Market research estimates valued the industry at nearly $1 billion in 2020 and that value is expected to grow by 30% to 50% over the course of 2021. The Business Research Co. published an expected industry value of $2.89 billion by 2025.

In the eSports world, most revenue comes from sponsorships, along with media rights, publishing and streaming costs and merchandise and ticket sales. While many industries have lately been taking traditionally in-person operations online, esports has been taking its usual online, remote activity into more brick-and-mortar operations, with venues like Contender and other franchises and small businesses, and even stadiums and arenas such as the Fusion Arena in the Philadelphia Sports Complex and the Esports Stadium Arlington in Texas.

Fino also referenced the growing popularity among colleges and universities to have recreational and competitive esports leagues, and even majors and minors focused on esports performance and business aspects.

“It’s a really interesting industry,” she said. “The way that it’s growing too, there’s so many job opportunities. Where my children go to school, they’ve actually just added an esports minor in college, and there are some colleges that I’ve found that actually have esports as a major, in addition to the number of universities that have Division I esports scholarships. And they give out scholarships even more so than the traditional sports.”

Being central to several colleges in the area was part of Fino’s decision to open in Wappingers Falls. Nearby Marist College, Dutchess Community College, SUNY New Paltz and the U.S. Military Academy at West Point are among those with esports teams, and Sacred Heart University in Fairfield even has an academic minor focused on esports.

Fino hopes that Contender can serve as a venue for events and tournaments for programs such as these.

Although the venue is open anytime for individuals and groups to drop in and play, Fino said that it is primarily events-based, with public events to be posted on a monthly basis, with more specific tournaments and events for leagues and official teams to be held at the space.

“We’re trying to get a youth league established, similar to traditional sports, where the kids would practice twice a week and they’d have a game Saturday or Sunday morning, where they can learn the team-building skills and work together and build a sense of community,” she said.

“So that’s one program we’re looking into, as well as adult leagues, and I’ve been looking into some of the local universities, who might use my facility to practice or hold some of their competitions, and perhaps down the road hold a combine, like how traditional sports do for recruiting events for colleges.”

Contender has 46 PCs, six Xboxes and eight Nintendo Switches for guests to play on, with fast, state-of-the-art equipment and 1-gigabit fiber-optic internet connection. It’s not just the technology that draws in guests, though, according to Fino.

“It is a sense of community and that’s the whole thing,” she said. “We have tables around where parents can come watch the children play, they can hang out. If they want to get off the game, they can sit at the table and play chess. We have TVs, and streamers can come stream their games through Twitch if people want to watch that. We will have viewing parties, so if there’s, say, a League of Legends tournament being held in Japan, we can have people come watch it here.”

Fino hopes that her business won’t be limited only to the gaming community in the area. Groups seeking event space for birthday parties, bachelor parties and corporate or community team-building events, she said, can get together and have fun at Contender.

So far, interest from the community has been positive, according to Fino, with people visiting and even buying memberships before it officially opened on Aug. 8. Fino is also already in talks with local organizations for partnerships.

“Every year there are more colleges offering scholarships for (esports) and every year there are more job opportunities in this industry. And even though so many people in the area have ‘Help Wanted’ or ‘Now Hiring’ signs … I’ve had probably close to 100 (job applications) in the past four or five months, so it’s an exciting place and everybody in this industry is very passionate about esports. It’s exciting for me too, because in the beginning I didn’t know too much about it, but I’ve really studied it the past year and a half. I still have a lot more to learn, but it’s been exciting.”